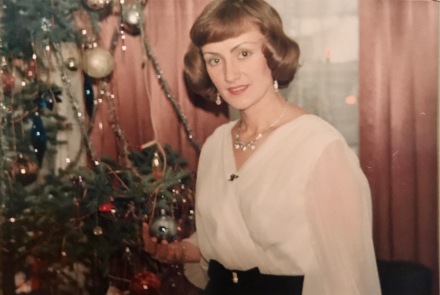 A fresh, 20 year old Liz Burg stepped out of an airplane and into the city of Chicago, with a two-month baby boy in one arm and a suitcase on the other. Cesar Hervas and many family members waited in the airport and crowded around her for a huge celebration. Liz had made it to America. She talks of this day, October 25th, 1958, as one of the greatest days of her life. Coming to America (and eventually becoming an American citizen in 1966) were 2 of my Grandma’s proudest moments; she wanted to shout from the rooftops how blessed she was to be here. She was always encouraging us to never take for granted our freedom. 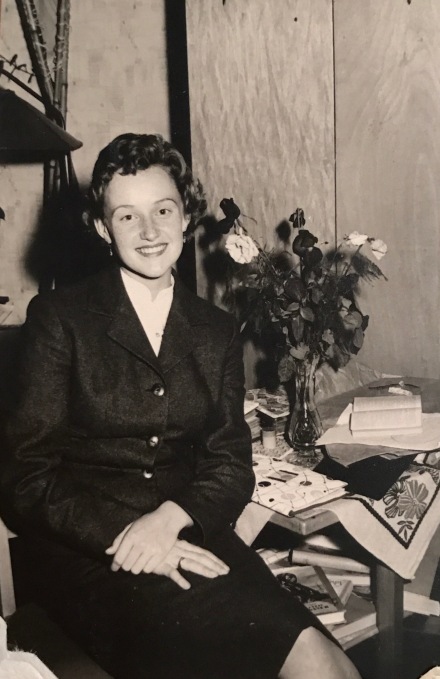 Just about 9 months before she passed away, she wrote on her facebook page the following:

Today is a great day! 58 years ago I arrived in the USA with a little blue suitcase that held all my belongings and a baby, Chuck Hervas, 2 months old. I entered the land of my dreams and have never been disappointed. I love this country! Wanted to be an asset, learn the language, work hard, adjust to the customs of this fabulous land and integrate with the American society. My heart overflows with gratefulness for the people that mentored me and helped me to adjust. I often think what would I take today that would just fit into a suitcase if I had to leave? We have so much but need so little! I’m so fortunate to be an American Citizen. My family and friends mean the world to me. God bless, Liz (Hervas) Burg

Chicago will always hold a strong, special place in my heart, not just because I was raised there, but because it was the city that Grandma found her freedom in; our roots were now established there.

Grandma absolutely believed in working for her success. Right away, as a German immigrant, she dove right in and got a job as a keypunch operator in Chicago. She made $50.00 a week, which was to her. . .  a FORTUNE. After 6 months on the job, she told a co-worker that she was bored with the job and was fired on the spot. She said she was speechless!

She went to deposit her last check at The Bank of Chicago. True to her spirit, she thinks, “why not find a new job as fast as possible?” She explained to the teller that she had lost her job and wanted to work as a bookkeeper at the bank. The teller gave her an application. The application asked how much money she was wanting to make. Having no idea what to put down, she decided to ask for $75.00 a week. $25.00 more than what she was making prior. After just 2 days, she was hired…. For $75.00 a week.

As you can imagine, a marriage after only a few months of dating, a brand new baby, and vastly different cultural backgrounds made for a very, very difficult first year of marriage. Grandma was still struggling to learn the English language. Spanish was the only language spoken at home, so she watched children’s shows on television to learn English. She watched her very first television show ever at the age of 20.

Grandma’s marriage was struggling, and she found herself wanting to leave. Instead she got pregnant again with baby #2, and Roy Hervas was born in 1960. Soon after, George joined his older brothers as baby #3 in 1961. (We could stop right there and this woman would already be my hero for having 3 children in 4 years. Goodness gracious.)

The family of 5 moved around here and there, but primarily lived in the North side of Chicago in the 60s (making sense why we are such huge Cubs fans over here?). One of my favorite stories of Dad’s childhood consists of the Cubs and Wrigley Field. As a young boy, Grandma would give my dad $2.00. And for $2.00 Dad could ride a bus, get into Wrigley Field, and also eat lunch. We all know of the Cubs’ struggles over the years, but Dad was lucky to see Hall of Fame members, Ernie Banks, Billy Williams, Ron Santo, and Fergie Jenkins play many times. Some weeks, Dad would go to a Cubs game every single day.

On January 11th, 1966, my grandparents and my Dad sat in the federal courthouse awaiting a judge to proclaim them American citizens (Roy and George were born citizens since they were both born in America). My grandparents were extremely firm with Dad, telling him, “You cannot even so much as make a peep, or the judge will not let you in.” Dad recalls being extremely nervous and did not even move a muscle. When the judge stopped talking, Dad quietly asked, “Am I in?” Grandma looked at him and said, “You’re in. We’re all in.” Even at 7 years old, he understood the significance of this moment and remembers waving his little American flag with pride.

If you haven’t already taken notice of Liz Burg’s dedication to work ethic, here is another reminder. Her boys learned quickly that their home was going to be spotless. Every Saturday morning, each boy was given a chore and you’d better believe it would not just get done, it would get done PERFECTLY. Dad recalls many mornings sitting on the back steps and cleaning each stair with a scrub brush (and a toothbrush for the corners). Grandma has always believed in working hard for your success, and she would carry this throughout her entire life, even consistently praising my husband for his work ethic and taking a great interest in his business which he started himself.

Whenever Grandma talked about my Dad it would always make me smile. In her final interviews with my sister she went on and on about how Dad NEVER disobeyed and was just the perfect little child (Insert eye roll. No way I believe that for a second). She was very proud of an incident in which she offered Dad some hot chocolate one evening and he refused. I guess Grandma gave him hot chocolate every evening and it really bothered her that he told her he did not want it. So she sent him to bed without any hot chocolate and she proudly proclaimed, “He never denied the hot chocolate again and he never told me no again.” Every time I heard this story, I would always wonder why it was so important for her that he drank a hot chocolate every night and most importantly, I’d think that my children did NOT need to hear this story.

In 1972, the Hervas family moved out of the city and into the suburb of Des Plaines (where I was born only 12 years later – how about that!). Grandma and Cesar wanted a better life and a better education for their boys and they found that in the suburbs.

My grandparent’s marriage was very much a struggle. My grandpa Cesar was a Catholic and my Grandma didn’t seem to know what she believed. She was raised a Catholic, but all of the rules and confessions did not make a lot of sense to her. She was very interested in astrology and also dabbled in the belief of the Jehovah’s Witnesses. One night she had a few of them over for a study. When Cesar came in to find her communicating with Jehovah’s Witnesses, he ran them out and told them never to come back again.

At 14 years old, Dad came home from school one day and told Grandma about a girl named Linda. He was quite smitten with Linda and explained to Grandma that the only way Linda would go on a date with him was if he went to church youth group with her.

To this day, I am grateful beyond words for Linda. I’m thankful that a young, beautiful girl of 14 bravely asked my Dad to go to church with her. Because 1 week after that first date to church, in April of 1974, my Dad claimed Jesus Christ as His one and ONLY Saviour. He put all of his hope and trust in Christ’s death on the cross and in His victory over death by rising from the grave. No more confessions, no more good works for the sake of good works, and no more fearing dying without confessing his sins. Because of Jesus, to this day, Dad lives in freedom from the trappings of religion and will see his mother again someday when God calls him Home.

Thank you, Linda, from the bottom of my heart (and ironically, her daughter would become my very best friend for all of my years of elementary school. So no, it didn’t work out between Linda and my dad. . . to which I’m grateful, of course).

Things were getting progressively worse at home. With Dad going to church and telling his parents about his new freedom, Cesar became increasingly unhappy. Dad invited Grandma to church, and she did go with him on Mother’s Day. She says the thing that struck her the most was how the women were treated. She was in awe of how they were honored; she had not experienced a man in her life respect and honor her like that. She was treated poorly by men from the moment her dad wanted nothing to do with her as an infant.

Grandma loved her cats all the way until her death

The marriage eventually ended in divorce in January of 1975. I think it’s important to add something my Grandma jotted down in a testimony she wrote out. As difficult as the marriage was, she says:

“There were good times too – not all was bad. Cesar was an excellent provider and fun-loving person. And I was no saint.”

I’ll leave this chapter of her life closed. 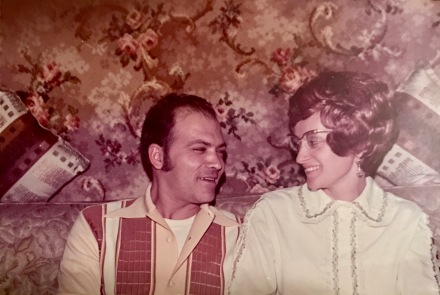 Once again, Grandma found herself in a bad situation. She had three young teenage boys, no job, no credit card, and bad health. With the money from her divorce, she bought a town home, found a low paying day job and babysat at night to make ends meet. Grandma had a special relationship with my Dad, and she listened to him. One day, Dad lovingly told his mother,

“Mom, your face is in the mud. You are on your face looking down. You need to turn around and look up.”

Dad continued to ask his mom to go to church with him, and with no intention to go, but out of deep love for her son, on January 22, 1975, Grandma went to Brentwood Baptist Church (where she was a member at the time of her death) with Dad. Grandma writes about that day,

“I was gloriously saved at age 36. My life changed dramatically.”

Hello. My name is Becca. I'm a lover of beauty, books, music, theater, and my family. A follower of Jesus Christ, my aim is to glorify Him simply by learning how to shine with joy through every ordinary moment He gives me. Follow me on Instagram if you want to see snippets of our ordinary, chaotic, beautiful lives.

Journey of Sarah
marylekoshere.wordpress.com/
When Mercy Found Me